James Bond (Sean Connery) was sent to to a clinic in Shrublands, where he met Count Lippe (Guy Doleman). When 007 left the clinic in Aston Martin DB5, Lippe followed him in his Ford Fairlane with the intention of killing. Suddenly a motorcycle joined the car chase. It was Fiona Volpe (Luciana Paluzzi) sent by SPECTRE organization to kill Count Lippe for failling his job.

The chase scene was filmed at Silverstone Circuit on June 21st 1965. 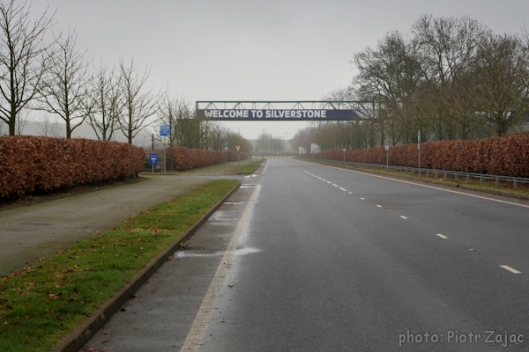 The Silverstone Circuit is located in England next to the Northamptonshire villages of Silverstone and Whittlebury. It was built on the site of the RAF Silverstone. There are still airfield’s runways within the outline of the track. It is the host of different racing series including Formula 1. There are headquarters of several Formula 1 teams not far from the circuit with Sahara Force India Formula One Team headquarters in the very Silverstone village.

In the chase scene Bob Simmons replaced Guy Doleman, who played Count Lippe. The film crew did not notice as a stuntman left the car before the explosion, which caused for a moment very nervous atmosphere. Director Terence Young ran in panic toward the wreck, luckily nothing happened to Bob Simmons.