James Bond (Daniel Craig) and Madeleine Swann (Lea Seydoux) escaped from burning headquarters of Franz Oberhauser. (It is worth to notice that the scene filmed on June 28, 2015 in Erfoud, Morocco with supervision of Special Effects and Miniature Effects Supervisor Chris Corbould has been awarded a Guinness World Records™ title for the Largest Film Stunt Explosion. 8418 litres of fuel and 33kg of explosives has been used.) In the next scene, the film moved from the sun-drenched desert to London by night. M (Ralph Fiennes) opened the door with „Hildebrand Prints and Rarities” written on it. Together with Bill Tanner (Rory Kinnear) and Q (Ben Whishaw) he climbed external stairs and entered small room on top of the building where James Bond and Madeleine Swann waited for him. After short discussion they left the room. MI6 team drove off and Madeleine Swann walked away alone. After a few steps she stopped and looked back at an empty street.

The scene was filmed on May 31, 2015 at Spring Gardens near Trafalgar Square. Going from Buckingham Palace along the Mall after a few minutes walk you can see impressive Admiralty Arch (photo below). T-shaped Spring Gardens street is right behind it. Turn right before the Admiralty Arch to see the place where Madeleine Swann was walking alone. If you want to see the entrance to the safe house you have to walk straight ahead. 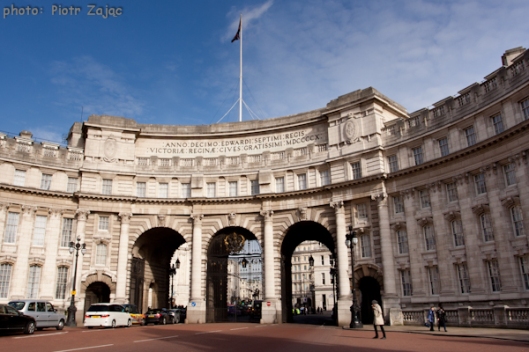 There is a small square behind the Admiralty Arch, from which you can already see Trafalgar Square with Nelson’s Column (photo below). On the right side of the photo there is a Drummonds Bank building with “Spring Gardens” street name on it. 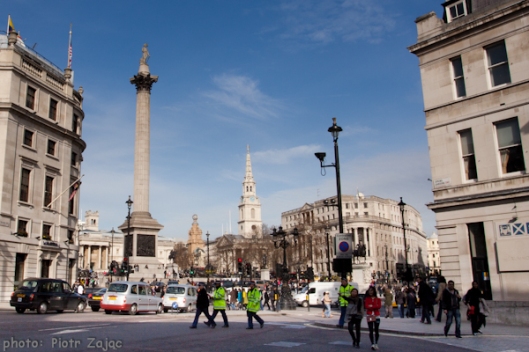 After a few meters on the left you will see the entrance to the safe house, however you will not find any „Hildebrand Prints and Rarities” sign on the door. The store name was inspired by the title of the Ian Fleming story. The book entitled „For Your Eyes Only” with short stories: „From A View to A Kill”, „For Your Eyes Only”, „Quantum Of Solace”, „Risico” and „The Hildebrand Rarity” was published in 1960.

In the next photo you can see similar frame as the one in the film with Madeleine Swann saying good bye to James Bond.

In the last photo there is an arch connecting buildings on both sides of Spring Gardens that Madeleine Swann saw when she turned back.