After killing Marco Sciarra in Mexico James Bond (Daniel Craig) arrived to Rome to attend his funeral. From a distance, he was watching the mourners leaving the chapel. In the next scene he was watching them standing at the Sciarra’s grave. After the ceremony he approached the widow Lucia Sciarra (Monica Bellucci) and began a conversation that was interrupted by her bodyguard.

The entire funeral sequence was filmed in the second half of February 2015 at the Museum of the Roman Civilization (Museo della Civiltà Romana) in Rome, Italy. It is located in the south of the city away from the main tourist attractions. Motorsport fans may be interested in the fact that Formula E street circuit is located very close to the museum.

The complex is made up of two buildings with a long portico of travertine columns. Standing on Via dell’Architettura you will see the building with the main entrance to the museum on the left, the building with the Planetario on the right and the portico with „MUSEO DELLA CIVILTA ROMANA” sign on top in front of you.

In the first scene of the funeral Daniel Craig was filmed in front of the main entrance to the museum. He was looking at the entrance to the Planetario. Mourners were walking left towards the portico.

In the next scene Daniel Craig was walking between travertine columns towards mourners. There was Piazza Giovanni Agnelli behind columns and skyscraper at Piazza Guglielmo Marconi in background.

After the funeral widow Lucia Sciarra returned home. It was filmed in the first half of March 2015 in Villa di Fiorano. Everyone can rent it for the wedding or elegant party. It is located at Via Appia Antica less than 1,5 km from Rome airport Ciampino.

Real filming locations compared to film scenes. Film scene on top and my location photo at the bottom.

BACK TO LOCATIONS GALLERY

On March 10th the car chase scene for “Spectre” film with Aston Martin DB10 and Jaguar C-X75 was shot at the Tiber river in Rome. 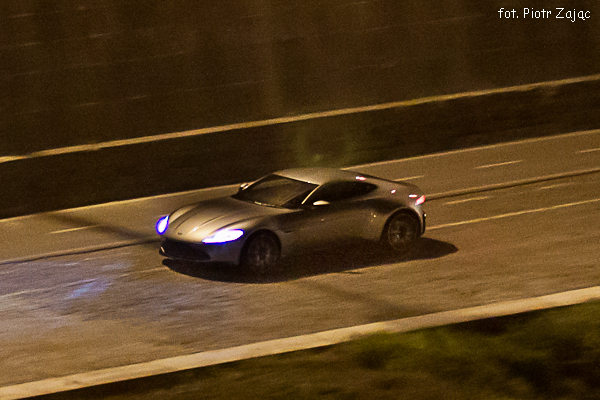 Cars were riding on a road next to the river as seen in a picture below.

The crew occupied for the film the street along the river between Umberto 1st bridge and Sisto bridge and there were crew trucks at Ponte Umberto 1st bridge. I was surprised checking that place in Google Street View. In September 2014 when pictures for google were taken, there were trucks of another film crew in the exactly same place!

Along the river there were film lamps prepared for night shooting. One of them is presented in a picture below with the Castle of the Holy Angel in background. In next picture the lamp is on. 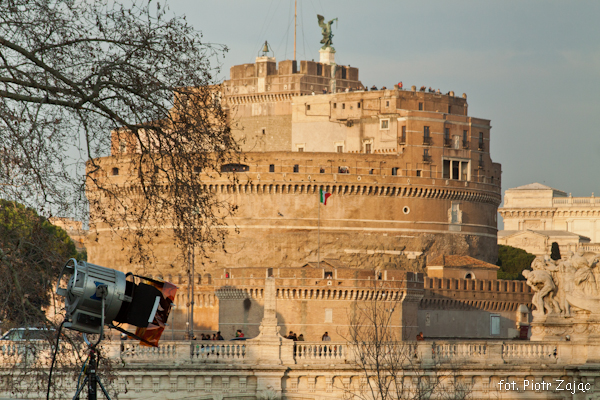 After sunset all city lamps and film lamps were on as seen in a picture taken from Ponte Sisto bridge.

The crew has started preparations for shooting. There was motorboat and jet ski on Tiber river and tracking vehicle with cameras riding both ways.

During the day at the Ponte Umberto 1st bridge there were only crew truck parked. In the evening several Aston Martins and Jaguars appeared on a street at the river.

In the movie there was only one Jaguar chasing one Aston Martin, however on the set there were 3 Aston Martins DB10 and 5 Jaguars C-X75 from … 5 existing in the world (according to information i.e. from Wikipedia). 4 Jaguars were standing in one row next to each other, but the last one was parked a few meters from them with sheet of paper by wiper with „FLAME PROOFED DO NOT TOUCH NON TOCCARE” written on it. Two Aston Martins had paper sheets by wipers with „NO SMOKING” written on them. So we could expect flames on the set that night.

All Jaguars on the set had the same license plates numbers: “ROMA860K”. I was a bit surprised when I have noticed that all of them had steering wheels on the left side.

There was one Aston Martin and one Jaguar with remote drive POD system mounted on roofs. Using such system, stunt driver can drive a car sitting in metal cage on a roof of the car, while actor is sitting inside, pretending steering.

Besides Aston Martins and Jaguars there was another interesting car – tracking vehicle with several cameras on it. 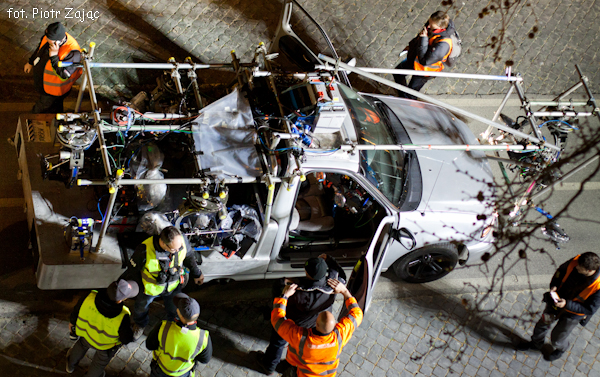 On the platform of the tracking vehicle there was clapperboard with the title of the movie “Spectre” written on it.

Car chase scene in Rome with Aston Martin DB10 and Jaguar C-X75 seems to be one of most exciting scenes in new James Bond film “Spectre”. Although such scenes in movies usually last no more than a few minutes, it takes a few days or weeks to shoot them. It was similar in this case. “Spectre” film crew was working on the scene for several nights in a row. In example on March 2nd 2015 they were filming on Via della Conciliazione (photo below) with St. Peter’s Basilica in background.

On March 8th I was lucky to see the car chase filming on Via Nomentana. All the cars were located at Ministero delle Infrastrutture e dei Transporti where the film crew built temporary fence (photos below). 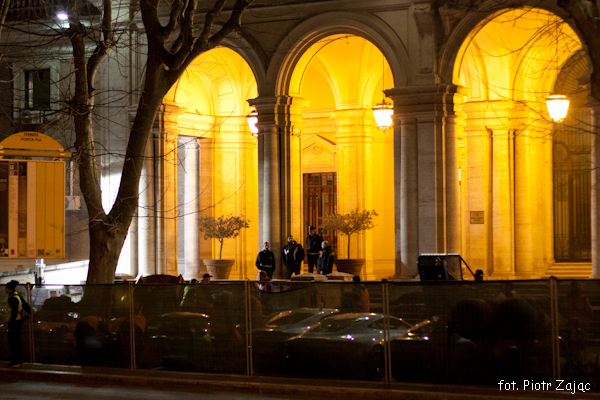 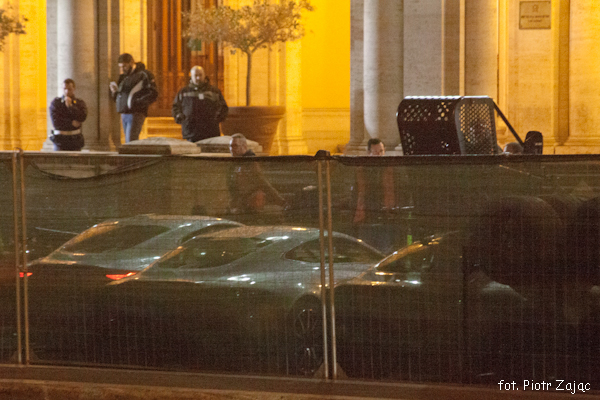 There were only two cars – one Aston Martin DB10 and one Jaguar C-X75 in the scene, however there were more of them on the set.

About 10 p.m. everybody on a street could hear engines running – the sound was like on a pit lane on a race track. At first the car with cameras left the parking lot.

Some time later Jaguar C-X75 with license plate “ROMA 860K” appeared and drove away on Via della Conciliazione street. 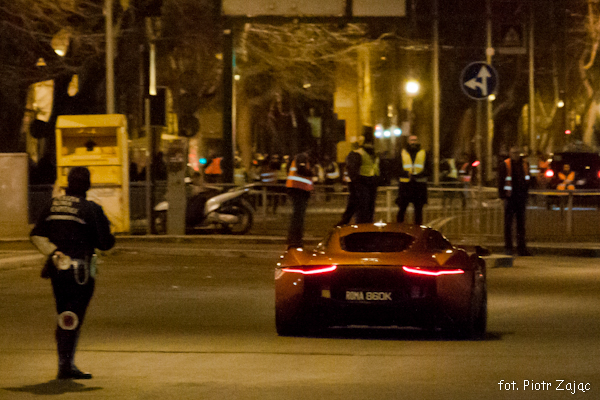 And finally the Jaguar DB10 left the parking lot and the filming began.