In three James Bond films the MI6 headquarters, where M’s office was located, was portrayed by the Old War Office Building in Whitehall, London.

For the first time the building featured in an establishing shot in “Octopussy”. We can see Whitehall with the Trafalgar Square in background and the Old War Office on the right. Inside the office there were Miss Moneypenny (Lois Maxwell) with her assistant – Penelope Smallbone (Michaela Clavell). The producers were looking for someone to replace Lois Maxwell who was playing Miss Moneypenny from the first James Bond film. They could not find anyone for replacement so they decided to introduce the assistant.

In “A View to a Kill” James Bond reported in the MI6 office right after opening credits with Duran Duran song (read more in Duran Duran in “A View to a Kill”). Camera briefly followed one of a horse guard on the other side of Whitehall and turned over to the Old War Office. Inside the office there were 007 and Moneypenny played for the last time by Lois Maxwell. She was the same age as Roger Moore (both born in 1927), who also played in James Bond film for the last time. Lois Maxwell was Miss Moneypenny for 23 years in 14 James Bond films.

For the third time the Old War Office building was presented as MI6 headquarters in establishing shot in “Licence to Kill”, similar to the shot from “Octopussy”. The scene inside the office was filmed in a studio in Mexico.

In all three sequencies there were red double-deckers on the street. They are still present on the Whitehall. 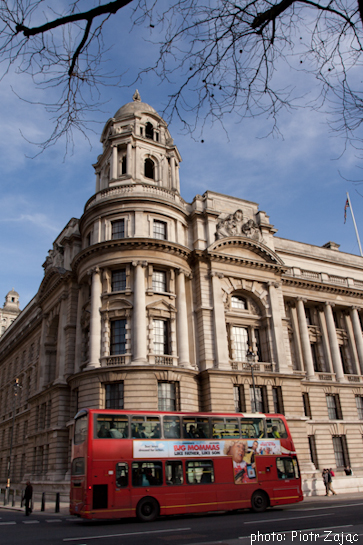 The Old War Office building or actually its domed towers (one of them in picture below) returned to James Bond film in “Skyfall”. 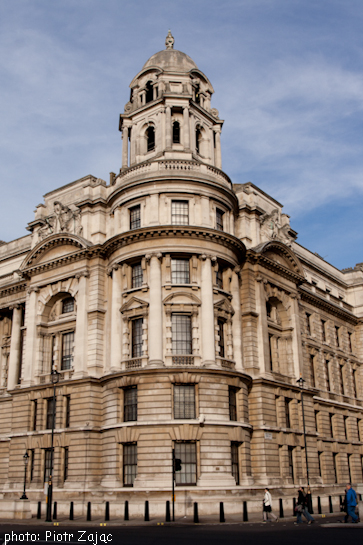 At the end of the film James Bond was standing on a top of a building looking at London panorama. The scene was filmed on the roof of Department for Environment, Food and Rural Affairs (DECC). The building can be seen as first from left in a photo below and in background in the next photo. There is also the Union Flag between domed towers on the roof of the Old War Office as it was seen in “Skyfall”. 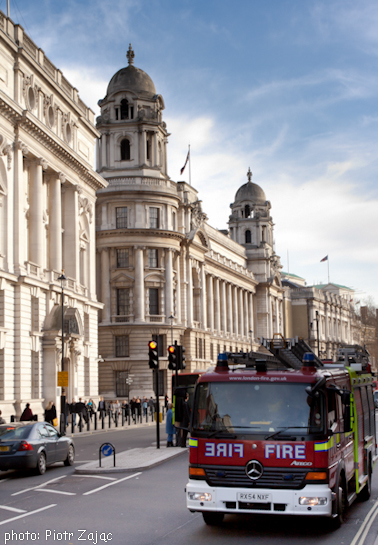 Standing on the roof James Bond was looking at the Big Ben in background (it can be seen also from the street as presented in photo below). There were two domed towers on the Old War Office on the right. 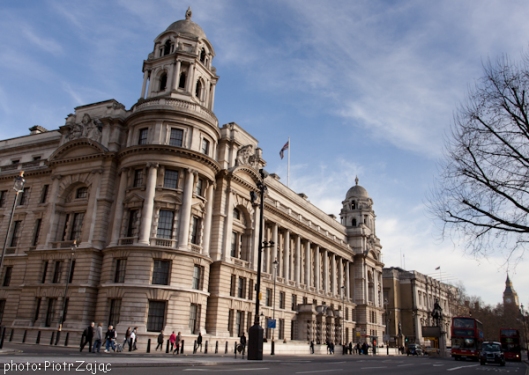 Shortly Moneypenny joined Bond standing on the roof. In the next scene they were both talking in MI6 office. The headquarters at Vauxhall Cross (that is real headquarters of British Secret Intelligence Service) was destroyed at the beginning of the filmed so the office returned to Whitehall, but it was not clear to which building.