James Bond returned to Venice in 1978 in “Moonraker” (15 years after “From Russia with Love”). 007 played by Roger Moore arrived by gondola to St. Mark’s Square (see photos below presenting filming location of that scene).

He entered the museum-lobby of the Venini Glass Works that belonged to his main opponent – Hugo Drax. The scene was filmed in real Venini shop located at Piazzetta dei Leoncini next to Saint Mark’s Basilica (in the center of the photo below). 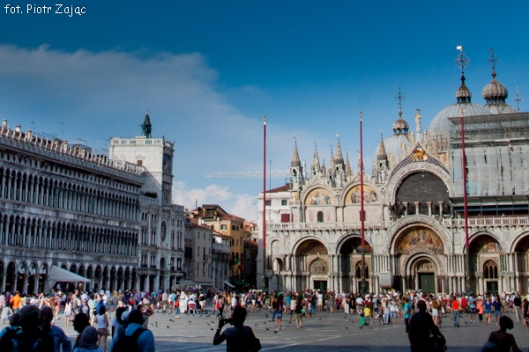 The interior of glass museum was shot at Boulogne Studios in France, in a building that had been a Luftwaffe factory during World War II. Bond noticed Dr. Goodhead (played by Lois Chiles), space specialist working for Drax and followed her. They left the museum with rear exit. That scene was filmed in the courtyard of Conservatorio di musica Benedetto Marcello. The entrance to that building is shown in the picture below. 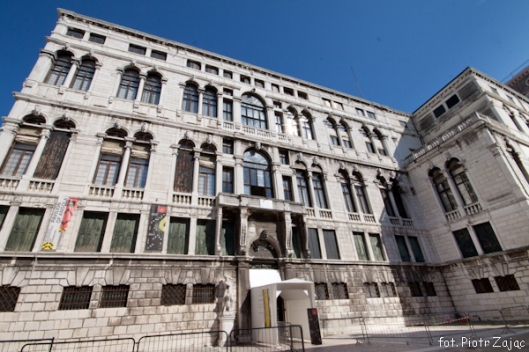 After leaving the museum Dr. Goodhed appeared in the door on the right side of the photo presented below and walked towards the place from which the picture was taken. 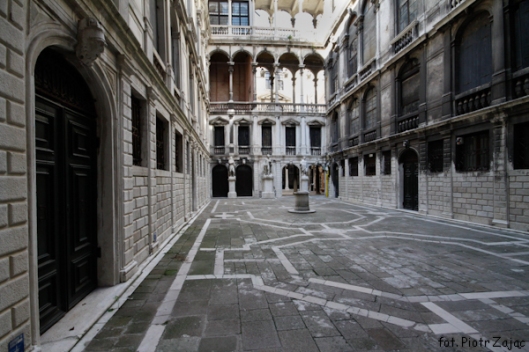 Next picture looks similar to the film shot. James Bond was standing behind the column and looking at Dr. Goodhead walking to the stairwell. The stairwell is clearly visible in next pictures taken from another side. It is worth noticing that the same courtyard was used as location in “Casino Royale”. 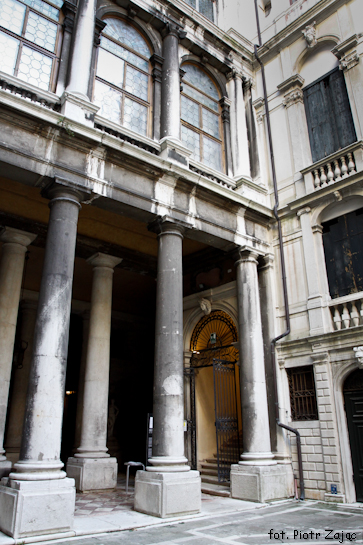 In the next scene James Bond pretended that he accidentially met Dr. Holly Goodhead. It was filmed at La Scuola nuova della Misericordia (pictured below), however the building was not seen.

I visited this place 40 years after Roger Moore and Lois Chiles were standing there, however the place has not changed much. There are only some new details, such as city monitoring warning sign (pictured below), that would probably be seen in background.

After short conversation with Dr. Goodhead, on his way back via gondola, James Bond was attacked. He killed the assassin and by opening a hidden control panel converted the gondola into a motorboat.

Chase sequence ended when James Bond arrived at St. Mark’s Square and converted the gondola into a land-capable hovercraft. The sequence with gondola leaving the water (see filming location in photos below) had to be repeated six times because the vehicle was not stable and Roger Moore was falling into water. 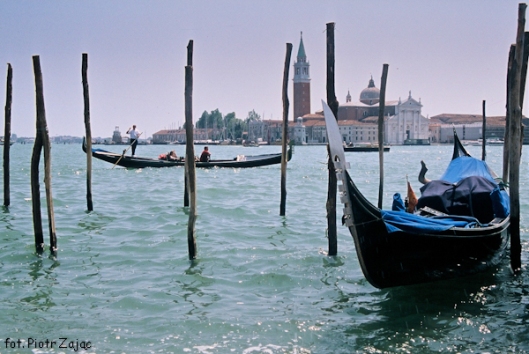 James Bond in the gondola converted into the hoovercraft was riding next to the Doge’s Palace (photo below) and then on St. Mark’s Square (next photos). Specially designed gondola with Ford chassis had a horn to worn surprised tourists. St. Mark’s Square could not be entirely closed so there was a lot of unaware people among actors and extras.

At night James Bond returned to the glass factory dressed as a gondolier. The scene was filmed at the Ponte dell’Accademia bridge with Santa Maria della Salute basilica in background. The place where 007 arrived in gondola is visible on the left side of the picture below). 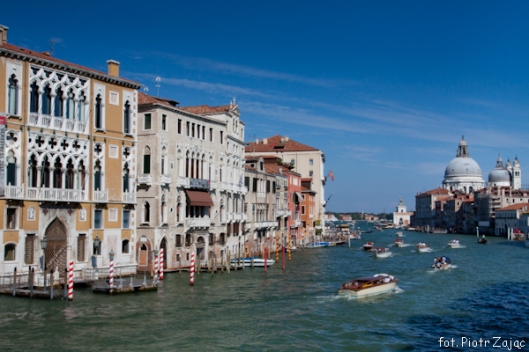 Bond throwed gondolier hat on figurine decorating a gondola similar to the one presented in photo below.

He opened a padlock with a skeleton key and entered the courtyard that he visited earlier when he was following Dr. Goodhead. The passage between the Canal Grande and the courtyard of Conservatorio di musica Benedetto Marcello really exists. In picture below the sunlight brightens the place where Roger Moore was standing with the skeleton key. The passage to the Canal Grande is on the right from that place. 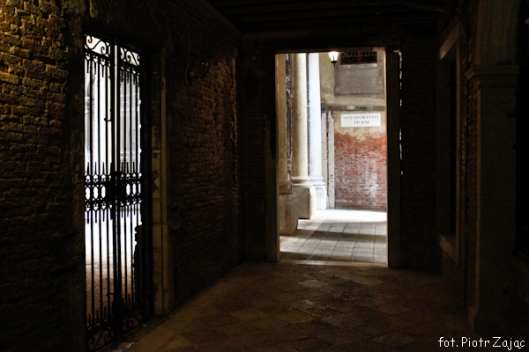 Next picture was taken from James Bond’s perspective. There is an entrance to the staircase visible on the right. He walked there a few seconds later. Dr. Holly Goodhead entered the same entrance after she left the glass museum. 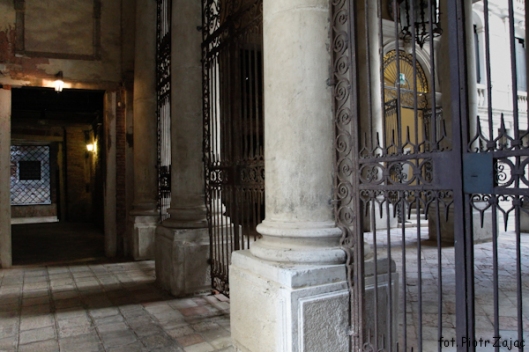 Next two pictures were taken from the other side of the fence. There is an entrance to the staircase mentioned before on the right side of the second photo. 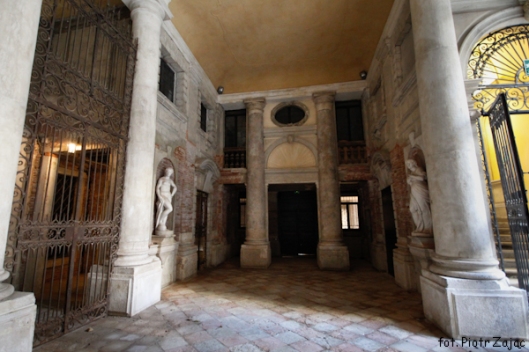 After visiting the laboratory and stealing a sample of deadly fluid, James Bond emerged from the stairwell (on the left in photo below). He was attacked between columns by Chang. 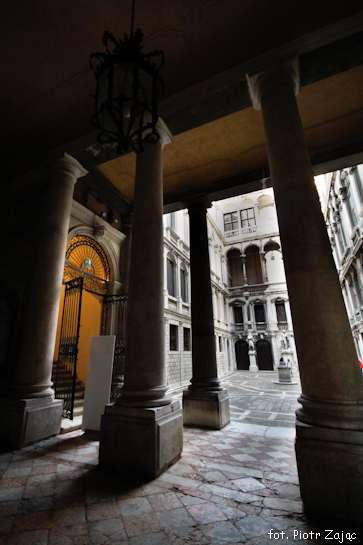 Next picture was taken from courtyard side. James Bond and Chang were fighting and slowly moving behind columns from right to left. 007 throwed his opponent against the wall and they both fell into the room full of glass throught the door on the left. In the next scene they used the largest amount of breakaway sugar glass ever. 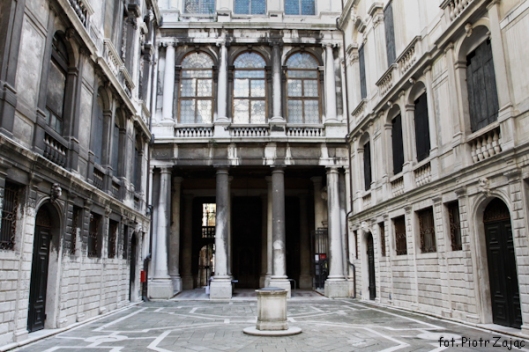 Meanwhile Dr. Holly Goodhead was relaxing in Hotel Danieli (second building from right in next two photos). James Bond joined her soon in her apartment. There was a flood during filming, so the film crew had to stop working several times to move power generators to upper floors.

James Bond will be back in Venice 28 years later in “Casino Royale” with Daniel Craig as 007.