Media representatives were waiting for Gustav Graves (Toby Stephens) at Buckingham Palace in London. There was also his assistant, Miranda Frost (Rosamund Pike), waiting for her boss. Right on time he appeared in the sky with Union Jack parachute. He landed between them, answered a few questions and together with Miranda Frost went by car to receive his knighthood from the Queen. James Bond (Pierce Brosnan) was standing in the crowd and just looking at the villain. 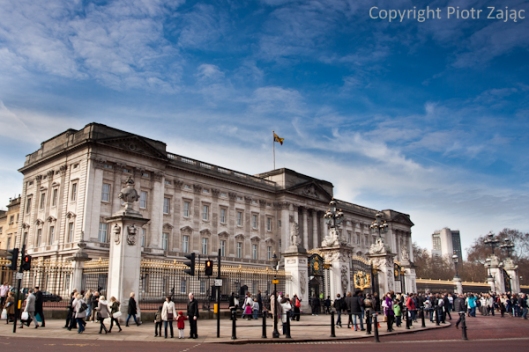 That sequence was filmed in April 2002. Film crew got permision to work around the Buckingham Palace for one day only, until lunch time.

There was parachute jump of 3 stuntmen planned for the scene. To fly helicopter less than 1 kilometer above the Buckingham Palace it was necessary to get special permissions from Anti-Terrorist Units. Executive Producer Anthony Waye said that according to the script the scene was supposed to be filmed at the House of Parliament. About 2-3 weeks before filmimg it was decided to try to shoot at the Buckingham Palace. When they were trying to get permissions, Queen Mother died and all the offices were closed for 10 days. Permision to shoot there was received less that a week before planned filming day.

About 250 members of the film crew arrived on the set very early that day. Actress Rosamund Pike said that she had to wake up at 4 a.m. At 6.30 a.m. filming could begin as sun was rising.

At first the scene with parachuting Gustav Graves was filmed. Three stuntmen, who were made up to look like the villain in the film, were ready for the jump. They were flying in a helicoper with pilot Mark Wolff, who has flown helicopters for 8 previous James Bond films. 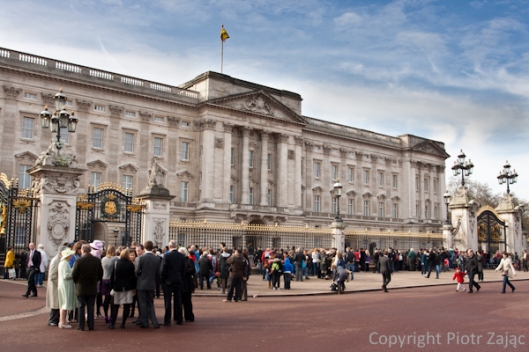 The first jumper was the team leader Allan Hewitt. Film director Lee Tamahori was happy with the shot. He decided to film second jump as backup. There was no time for third stuntmen to jump.

Afterwards the scene with Gustav Graves landing in the crowd was filmed. Actor Toby Stephens was suspended under the arm of crane 40 feet in the air. It was moving down so it looked like Stephens was parachuting.

Film crew had to clean the area before 9.30 a.m. as the Life Guards began preparations for the Changing of the Guard.

In the next photo that was taken at night you can see the Buckingham Palace, the square where the scene with Gustav Graves talking to media representatives was filmed and the Canada Gate where he was heading.

Film crew moved to the park behind Canada Gate (see photo below) to complete filming the scene. At that time houndreds of tourists were gathering to see Changing of the Guard. 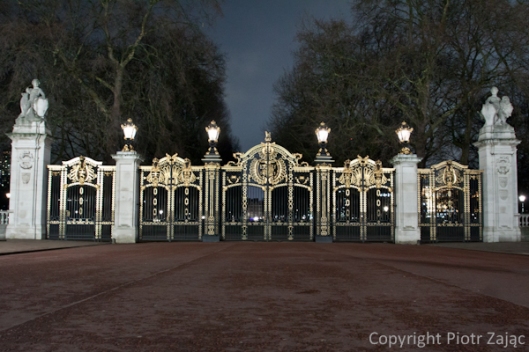 About an hour before end of filming, Pierce Brosnan arrived on the set. In his brief appearence in the scene he was standing in the crowd and looking at his rival getting into Range Rover.

At the end the scene with Miranda Frost and media representatives waiting for Gustav Graves was filmed. In the film it was shown before all other scened filmed that day.